The Sense and Sensibility Bicentenary Challenge 2011 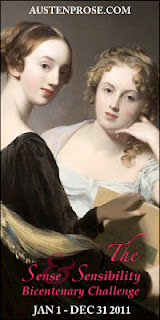 ﻿
I had already decided to participate in the Being a Jane Austen Mystery Challenge when I saw the information about the Sense and Sensibility Bicentenary Challenge. So, what the heck, I'll do that one too. Sense and Sensibility is my second favorite novel by Jane Austen. My copy is falling apart and I need to buy a new one anyway, so I'll begin the challenge by reading it again.
I'll try for the Aficionada level. I haven't heard of most of the recommended titles, but I've found about half of them at my public library. I'm not sure of my selections yet, but I'll edit my post when I've decided.
A tentative selection, in no particular order, based on my library:
S&S 2008
S&S 1995
S&S 1981
I Have Found It 2000
Colonel Brandon's Diary
Eliza's Daughter
S&S Screenplay and Diaries
The Cookbook Collector
The Dashwood Sisters' Secrets of Love
Reason and Romance
S&S and Sea Monsters

Unfortunately, a few of the ones I'd really like to read or watch are not available at my library, so I'll have to find them elsewhere.

Time-line: The Sense and Sensibility Bicentenary Challenge 2011 runs January 1, through December 31, 2011.
Levels of participation: Neophyte: 1 – 4 selections, Disciple: 5 – 8 selections, Aficionada: 9 – 12 selections.
Your Participation: Once the challenge starts you will see a tab included at the top of Austenprose called Reading Challenges. Click on the tab and select the Sense and Sensibility Bicentenary Challenge 2011. Leave a comment including the name of the book or movie read or viewed and a link to your blog review. If you do not have a blog, just leave a comment about your selection that you finished with a brief reaction or remark. It’s that easy.

Oh, of course there are prizes! There will be giveaways each month of the book or movie that I review in the challenge here on Austenprose to be drawn from comments left with each post, and one lucky Grand Prize Winner of all 12 titles tucked into a Jane Austen tote bag ($200.00 value) to be drawn from comments left at any and all of the reviews left on this blog or yours. Yes, that means that your readers who comment on your challenge reviews have a chance to win too. Winners will be announced monthly two weeks after each blog post, and the Grand Prize winner will be announced on January 01, 2012. Shipment to US or Canadian addresses only.
So, make haste and join the challenge today. I am so looking forward to revisiting Jane Austen’s classic tale through her eyes and others. Here is a list of possibilities for your reading and viewing selections: